What should I title this blog post?  How about “Finding Our Way”? Maybe “Galilee of the Nations”?  That’s pretty good but let’s try this … “Except Fear Itself”.

It has been an “interesting” week both here in Israel and around the world.  This brings to mind that old Chinese curse … “may you live in interesting times, come to the attention of those in authority and have the gods give everything you desire”.  No, it hasn’t been a terrible, horrible, awful week but it has been “interesting”. I suppose everything here is “interesting” compared to the “same old, same old” back home in snowy, cold Prince George.

With each passing week, Frieda and I are finding our way around the northern Israel region both physically and relationally. We’ve explored beautiful and wonderful places close to the apartment we are staying at and we’ve met many new people we hope will become friends.

Monday was Election Day here.  The third one in less than one year.  That’s what proportional representation can do to a country.  Deadlocked by about 20 or more political parties trying to form a coalition to control the government.  That is interesting.

Election Day is almost a national holiday with many businesses and government offices closed for the day to allow people to vote.  If the weather is nice lots of people take off with the kids to parks for some family time. Nevertheless, they still manage to have slightly over 71% of the voters actually vote.  We went down to a National Park called Hamat Tiberias which has hot springs and is very close to the Sea of Galilee. We grabbed an ice cream snack at a convenience store and walked along the street and lakefront for a while.

Tuesday we went grocery shopping at a store we hadn’t been to before.  As we entered a gentleman checked the empty cloth bags that Frieda was carrying with a metal detector wand.  That was interesting. As I pushed the shopping cart around we talked in English about what we needed and what the stuff we were holding in our hands was.  Within a few minutes, a woman shopper started advising us on how to buy the fruits and vegetable products and get the best deal. She had spent time in the state of New Jersey, U.S. and wanted to test her English on us.  A couple of minutes later a man also gave us advice about buying and gave us a mini-history of the man who started the store from a poor, working-class background and now owned many of these “Rami Levy” stores around Israel.  He seemed so proud of the store and its history I wondered if he was related to the man who started it! That was interesting.

Wednesday we went further afield and drove south to the largest National Park in Israel, Beit She’an.  It’s a 400-acre archeological site that had a population over 100,000 at its peak in the Roman and Byzantine periods.  We have been to Beit She’an many times as part of our guided Holy Land bus tours but we’ve never had time to climb the steps to the top of the “Tel” and look over the entire site.  This time we did! Hooray! We met a Jewish Swiss couple who travel to Israel many times just to explore on their own and struck up a conversation with them while we walked the park. That was interesting.

Nearby is another National Park site called Ma’ayan Harod.  It’s also known as Gideon’s Spring because it has the spring where Gideon weeded out his soldiers according to God’s instructions by having them drink from it.  As the story goes he went from some 32,000 soldiers down to 300 by telling those who were afraid to go home and then only taking the ones who drank the water from the spring by cupping it to their mouths and lapping it.  It’s a beautiful site which we plan to include in any future Guided Holy Land Tours we may do. The day ended with a trip to a city called Afula for some street vendor falafels.

Thursday evening we went to the Galilee of the Nations coffee shop for some “open mic” music and dessert.  There we met many of the Russian speaking members of the Morning Star Fellowship and listened to Russian and Hebrew speaking young people sing the blues in English.  That was interesting.

Friday was a big day as we picked up our new good friends Barry and Dalia, who live close by, and took them to the Magdala Guest House.  She was invited to display her unique artwork and speak about it’s meaning to those attending a Women’s Conference. We met more people from around the world including an American girl who reminded us very strongly of an adoptive daughter back home in Canada.  That was interesting.

Saturday we went to the Morning Star Fellowship for their regular service but the door was locked and there was nobody there.  I wondered if they had canceled due to the virus fears but no, it turns out they move the service to Friday night once a month.  Another couple who also didn’t know about the cancellation showed up at the same as us, so we took them for a drive to the Swiss Forest and walked a trail with them.  They were from Germany and had been coming to Israel many times on their own. That was interesting.

We did all of these things while the world seemed to be falling apart and going crazy about the COVID-19 (corona) virus.  Travel and tourism have taken a huge hit as people cancel trips around the world. I spoke with the Israeli travel agent who made the arrangements for our 2019 tour here and she sounded worried about her business due to all the cancellations.  We plan to meet up with her in Haifa on Monday before we do some grocery gift card distribution with Pastor Joseph.

Fear.  I was afraid of driving a big diesel van here.  But I couldn’t let that fear stop me because if I did I wouldn’t be able to function in the ministry of Beit Shalom.  FDR (past U.S. president) said once, “We have nothing to fear but fear itself.” While being prepared to withstand difficult times is wise, when we make knee-jerk responses to bad situations out of fear his statement is very true.  I want to quote something from my friend, Tom Birch’s book, “Jeremiah: An Inspirational Guide Through Troubles Times”.

“Bitterness, anger, and fear are all related.  When we hold onto hurts from the past and refuse to let God help us forgive, we become bitter.  When we believe someone is hurting us in the present and we don’t give it to God, we become angry. When we don’t trust God to take care of us in the future, we become afraid.  All three come from a lack of faith that God is in control and that whatever we lose in this life is in His hands.”

I’ve seen many blog posts and articles by doctors on the front lines of the COVID-19 battle that are saying what I want to say here … don’t let fear control your response to the ups and downs of life.  Be careful. Not crazy. You’ll just make things worse. 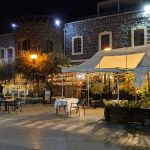 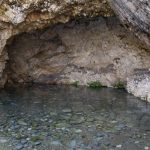 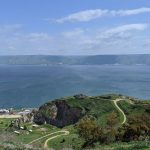 Sea of Galilee with a Tel below us. Taken from a trail in the Swiss Forest 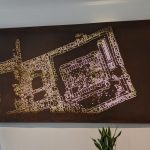 Map of the Magdala Synagogue 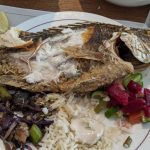 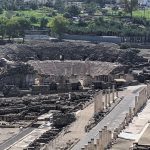 Beit She’an from the top of the Tel. 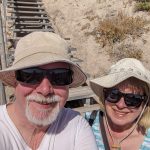 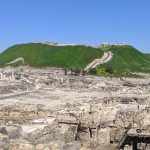 Beit She’an with the Tel in the far distance. 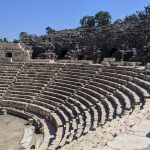 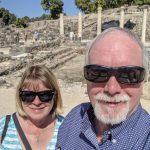 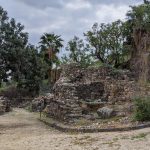 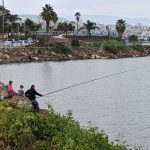 Fisherman with a big long pole on the Sea of Galilee

Why Are We Here?