“We are hard pressed on every side, but not crushed; perplexed, but not in despair …” 2 Corinthians 4:8

I think the word “perplexed” is a pretty accurate way of summing up our feelings this week.  You know, perplexed … mildly puzzled. Things are changing so fast throughout the world it’s really hard to keep our feet on solid ground.  Ah, but then there’s the last part of that statement … “but not in despair”. Yes! Perplexed, but not in despair! That too is an accurate portrayal of our feelings at this time.

Setting aside for the moment all the news surrounding the coronavirus our week was filled with a lot of really great stuff that you can only experience while living here in the Galilee.

We were invited to drop by Sunday afternoon and see some of the Purim celebrations the children were enjoying at the Beit Zinger boarding house for at-risk youth.  There were some kids in really creative costumes and great fun with the bouncy house, dance floor with DJ and games. It was kind of like Halloween, if Halloween in the spring was based on a Biblical heroine story and didn’t have any scary character costumes(I’m looking at you zombies).

We left Beit Zinger and headed back up to the south end of the Galilee where Joshua Aaron (check him out on Spotify or Youtube) hosts a weekly mini-concert of Christian and Messianic musicians.  That was really cool!

Monday we drove to the city of Haifa on the Mediterranean coast where we met up with Michal, the Israeli travel agent that helped us put together our 2019 Holy Land bus tour.  What a blessing she was as she showed us some of the sites around Haifa that we often miss on bus tours. She balanced showing us the Baha’i Gardens and the Mediterranean shoreline with solving problems relating to an Australian tour group who were potentially stuck in Israel when they needed to be in Jordan to fly home.

Our main reason to be in Haifa though was to meet up with Pastor Joseph Hadad and wife Ibtissam(Betty).  Pastor Joseph takes us along to the homes of needy people where we deliver grocery store voucher cards … but first, we eat!  He called me the day before and warned me, “Come prepared to eat! Don’t have lunch!” And he wasn’t kidding! We made six visits and each person presented us with at least a drink of tea with a snack and in one case, an entire meal!  At the end of one visit, after eating a half dozen delicious cabbage rolls, the woman of the house declared to me “You haven’t eaten anything! Here, have this!” and proceeded to give me another plate full! Seems I had helped myself to Frieda’s plate and hadn’t touched the one intended for me.  In her eyes, I hadn’t eaten anything. We were both quite full by the end of that day. But not just with food as we had such a great time relating to both the Hadad’s and the people they care for. A very satisfying day.

Tuesday was a quieter day.  We had planned to take the bus from Tiberias to Jerusalem but after our busy Monday we decided to have a “day of rest”.  We did some grocery shopping at the “Rami Levy” and then watched kids climbing a giant pile of snow trucked in from Mount Hermon.  Apparently you can even ski in Israel if the conditions are right on Mount Hermon.

Wednesday we drove to the Arbel Nature Reserve. The pictures I’m sharing here really don’t do it justice.

Thursday morning we packed a small backpack and prepared to catch an inter-city bus right in front of our apartment building that would take us to the central bus station in Jerusalem.  It’s a two and a half-hour drive with very few stops along the way. It’s an excellent way to see the countryside and I was very glad not to be driving into Jerusalem as we encountered what looked like Vancouver style traffic jams that brought us to a virtual standstill from time to time.

Our first visit that day was with Loic, our tour guide for our 2017 and 2019 Holy Land bus tours. We met him at his home (you can see the Israel Knesset from his “back yard”!), enjoyed a grand meal with him, prayed together with him for medical problems he is facing and then walked through “the Shuq” and to the Old City. By this time it was raining and windy and truly uncomfortable as the Old City merchants did their job of attempting to persuade you to “just come in my shop and look at what I have”. One gentleman tried to sell me a belt.  He started at $30 U.S. and after twenty or more “No thank you’s” was yelling “$10!! Only $10!” at my back as I walked away.

The next thing on our agenda was meeting up with Stefan and Letitia, a young couple that Frieda’s brother, Jake Friesen had told us to look up if we ever were in Jerusalem.  Let me tell you, trying to find your way out of the Old City using Google Maps is not the easiest thing to do. We prevailed though and made our way to the Succat Hallel 24/7 House of Prayer which was really close to their place. Spent a peaceful half-hour there in prayer before joining Stefan, Letitia and their young sons Ethan and David for dinner.  New Zealand meat pie, yum! Then back on the bus for the ride home to Tiberias. According to my phone’s step app we walked 15 thousand steps that day!

Then, it’s Friday and the world feels like it is falling apart as national leaders try to contain and lessen the effects of COVID-19.  Directly impacting Frieda and I was the announcement that Air Canada was stopping their daily flights in and out of Israel for two weeks beginning Tuesday, March 17th. Then we heard that Israel’s government was asking all tourists to leave the country.  Then we heard they weren’t asking us to leave.  Talk about whiplash! Whew! The situation with the coronavirus and the response to it had escalated rapidly to a – dare I say it? – fever pitch.

SHOULD WE STAY? SHOULD WE GO?

Now we had to consider whether we should cut short our stay in Israel and head home or stick around and ride this bucking bronco to the end.  Our coming to Israel for this time at Beit Shalom was filled with minor miracles that paved over a rough road and made it a smooth one. We have described our coming here this way: we had pushed on a locked door that would not give way and when we gave up and tried to walk away, God opened the door for us and pushed us through.

There were many circumstances that made it clear God wanted us here.  Now the question was, did He want to leave and return home? We decided to let Him show us by attempting to leave.  If it was God’s will that we go out, we believed that it would be just as easy as our coming in. It wasn’t. I really don’t have a beef with Air Canada as we have enjoyed their services many times in traveling to Israel, but it really wasn’t easy to connect with them to get the answers we needed to change our flight and leave Tuesday.  At least not for us. And that made it easy to conclude we should stay here for the long haul and return as planned. Besides, I feel leaving now would mean we had left before our work here was done.

Let me leave you with a couple of Bible verses that have become meangful to us as we contemplated flying home:

Remember, we may be perplexed but we are not in despair. 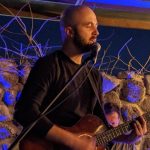 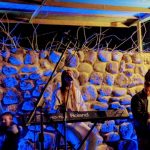 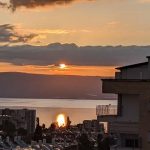 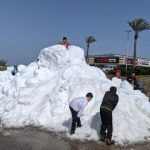 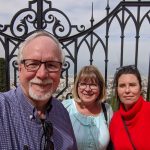 Above Haifa with our travel agent from 2019 Michal. 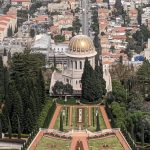 Baha’i Garden from above 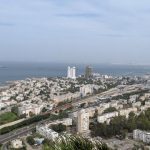 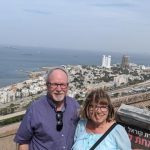 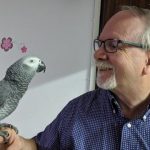 The parrot and me(2) 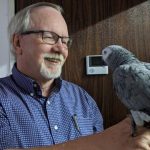 The parrot and me in Haifa 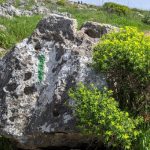 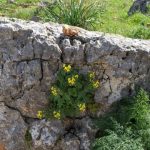 Overlooking the Arbel valley near Tiberias 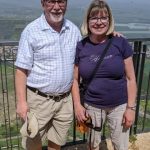 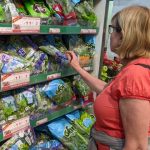 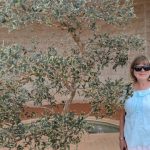 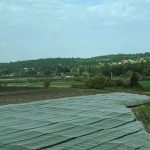 Agriculture must be the number 1 industry in Israel. 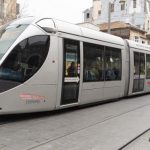 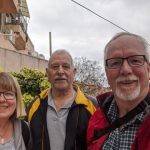 With Loic at his home in Jerusalem 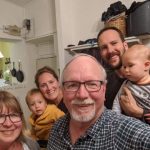 At the Bergen’s in Jerusalem.

Why Are We Here?